The Whispers progressive garment project is an initiative by Wearable Art Mandurah to grow the wearable arts community and enhance the artistic reputation of wearable art across Australia and beyond..

The project is similar to a progressive dinner or game of ‘Whispers’. The selected artists each create a section of a garment, through interpretation of a given theme and in response to the work of the other artists in the project.

The finished product is an acclaimed exhibition piece for the Wearable Art Showcase, held in June in Mandurah, Western Australia.

Each artist has four weeks to design and construct a section of the garment, before sending it to the next artist.

This project is facilitated by Anzara Clark

In 2018/19, Wearable Art Whispers took a broader thematic approach than previous years. The framework of the project remained the same, but rather than nominate a story and a name for the work to be created by the artists (as had been done in previous years), a concept was proposed that required the artists to a deeper level of research and have wider discussions about the theme. The selected theme was a Goddess or Patron Saint of Wearable Art.

All cultures and divinity hierarchies have deities or patron saints of textile crafts and artisans. These deities and saints demonstrate the importance of textiles and skilled textile artisans in their communities. Their role is to guard the knowledge and skills of their crafts, inspire and protect the artisans that are dedicated to those crafts and ensure the sacred aspects of those crafts are recognised and celebrated. Such a focus on a craft, through a deity or saint, ensures that the traditions and knowledge of a craft maintain continuity and cultural significance.

Wearable Art draws upon many textile and related traditions, yet is a genre of its own, albeit one without a dedicated deity or patron saint to watch over it and its artisans. This year we sought to amend this gap by creating a Deity or Patron Saint of Wearable Art. Each artist, as well as contributing creatively to the project in their allotted making time contributed to selecting the name in a structured voting process.

Throughout the project, the artists explored inspirational cultures and ideas. It was not the intent to copy a specific cultural style or aesthetic, but for the artists to explore the stories and images that excited them and helped them to tell a story of what a Deity or Patron Saint of Wearable Art would look like, what character they would have and what forms, processes, materials, images and motifs would speak to wearable art artists everywhere.

This was an intentionally broad base to start from. As individual artists and as a collaborative group the Whispers artists were challenged to bring the nebulous into form, to manifest and bring to life a character who resonates with Wearable Artists everywhere, to create a myth and imbue it with life. Each artist was faced with their own triumphs and challenges as they immersed themselves in the project and contributed to the flow and dynamism of the group process. So as well as a creative process, the project becomes a learning a development journey, offering rich insights for a creative practice into the future.

At the end of this journey, the 18/19 Wearable Art Whispers artists have brought to life ‘Poiesis. The Goddess of Wearable Art’. Pronounced ‘poi i sis’, the word Poiesis is derived from ancient Greek and references philosophical thought. Poiesis means ‘to make’, a reference to creative production. It is the activity in which a person brings something into being that did not exist before. Poiesis is the perfect name for a guiding deity for a community of artisans whose practice is based on always creating something that did not exist before and for a project whose very purpose and outcome has been exactly this. 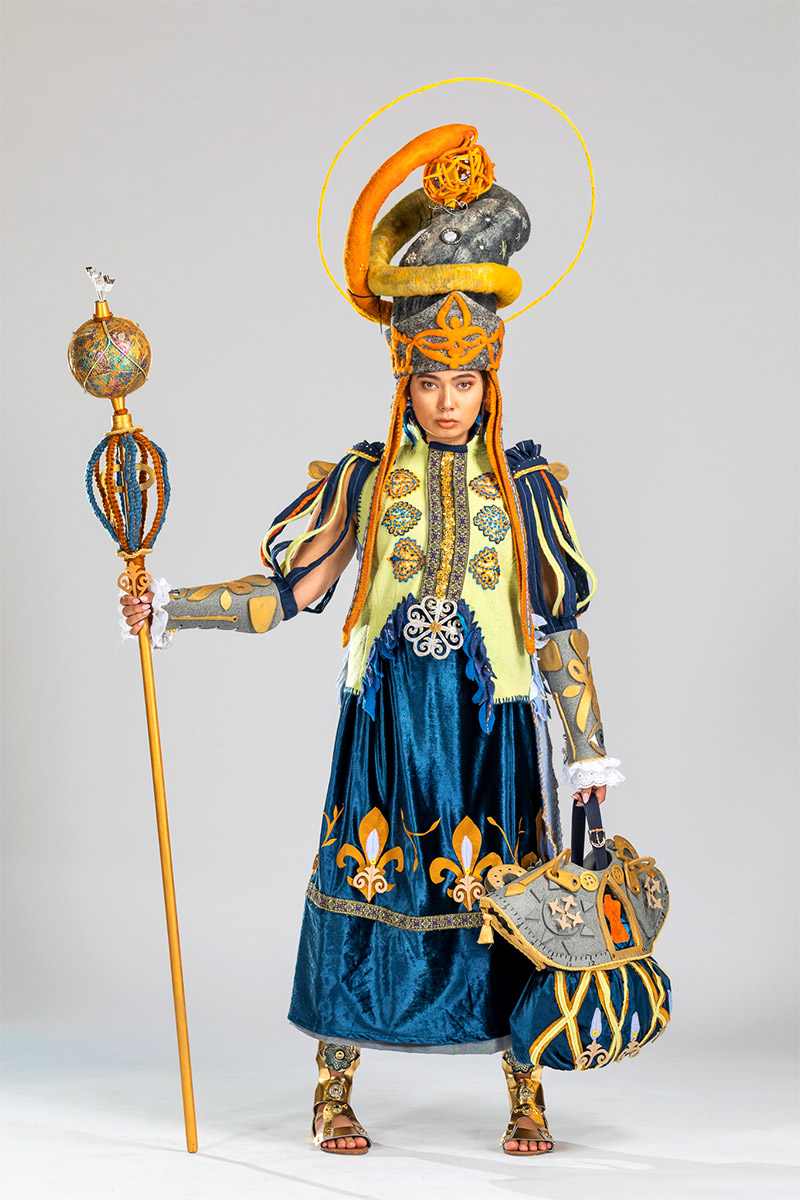 A goddess radiates tranquillity and equilibrium, and must express a meaning. Tall and pointy head-wear appears throughout history to represent dignity; often made of felt or gold and silver. The twist of the treble-clef on this headpiece honours all craftspeople of wearable and usable arts; whom whilst working together, sang the songs that wove the stories of their people. Deities wove the lives of all of us from the rays of the Sun, the Moon and the starlight from above. The felt appliqué is the oldest and most precise technique of felted artworks that used to adorn grand leaders.

Since ancient times wool-felt has been used for extraordinary headdresses because of its three-dimensional potential and sturdy free-forms. To make it resemble gold and silver, I've added silk fibres; the decoration made with appliqué and stitches. A wire centrepiece attaches to a cushioned cupola inside the hat.

I looked at shapes and images, listening to others ideas and looking at reference images, drawing garments, ideas, literal and figurative and then started looking at materials. I started a jacket, created a silhouette, added tails and cut geometric shapes into it. I wanted to create opportunity for others, to add to it and to allow for revelation, the under layers yet to come. It was strange sending the item, partly realised. to an unknown person to take up and run within any direction but also exciting. What would they add, change and what would be finally revealed?

Inspired by the conversations around patron saints and their protection of traditions, I researched traditional cloth making skills throughout the ages. In the Renaissance Manuscript Book of Hours, I was drawn to a particular page that depicted Mary at a loom with a young child in the corner. I discovered an emblem similar to that on Boroka’s hat and used this symbol on the skirt to reflect the gilded book pages and the leaf pattern in between. The loose woven gold netting on the bottom of the skirt symbolises Mary's time spent at this loom whilst minding her child.

Materials: For the gold emblems and pattern I have used loose woven gold netting and a traditional woven silk fabric and applied it to the skirt in a non-traditional way to represent how we can mix tradition with the future.

Gothic architecture and the Usekh Collar of Egyptian deities are visually strong images. Cathedral details, rising arches, stone and raw beauty are stunningly similar to flawless wearable art garments. The stone textured collar and wristbands, covered with wearable art tools and symbols with subtle meanings, give a sense of power. The bird - artistic freedom; the human eye and a key - represent design; and the sun and moon are an artist working day and night. The stained glass window reflects onto the dressmakers’ mannequin, revealing that architecture and wearable art have more in common then meets the eye.

Materials: EVA foam was hand cut, heat molded and glued before being spray-painted with a granite effect to mimic stone. The stained glass window on the front of the collar was made from blue Acrylic made from an off-cut from a previous outfit and then decorated with Tape and Cellophane.

This garment represents the skill, knowledge and creativity handed down through generations.  The Goddess of Wearable Art could appear in many guises, from a grandmother to a stranger on the internet.  She is encouraging, imaginative and not afraid of experimentation and “colouring outside the lines”.   With this line of thinking, her footwear is made of unusual materials, placemats and scrapbooking embellishments.  She holds a sceptre featuring the Orb of Inspiration – made from coffee pod and chocolate wrappers, bound by the ‘net and connected by technology to artists around the world.

At the end of the creative journey, the final Wearable Art Whispers artist Jane Stone has immersed herself in all the work that has gone before. Surrounded by the colours, textures and visions of all the Whispers artist she has sought out the voice of the garment, the song of the character created by all. Patiently drawing together the threads of all the pieces and stitching in her own inspiration, Jane has readied her for release into the world, an icon for Wearable Art artists everywhere.